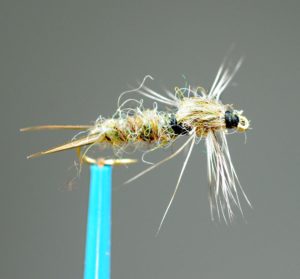 The Montana Stonefly is one of the first stonefly patterns taught to beginning fly tyers. Originally the fly was tied with chenille for a body. The improved version uses wool yarn and a better imitation of a real stonefly.  I have modified the pattern to use biot tails.

This pattern is described in Morgan Lyle’s book, Simple Flies. I have added this pattern to the Beginner Fly section of my web site.

The fly uses wool yarn for the body and wing case. Specifically, Jamieson’s Shetland Spindrift Yarn is used.  This yarn can be bought online and is relatively inexpensive.  A ball of yarn is less than $6, and shipping is minimal.  The yarn ball only weighs 25 grams.  Each ball of yarn will tie over 300 flies. The yarn is two stranded and has multiple colors in the yarn. For this fly, I used Thyme color.  Other colors are available and make great fly bodies. The oyster color, shown below, is used for the Killer Bug. 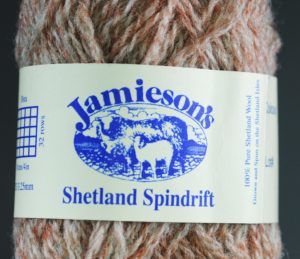 A picture of a stonefly exoskeleton taken on the Middle Fork of the Salmon River in Idaho.