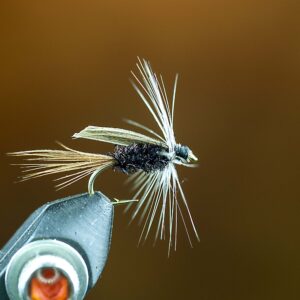 This pattern represents a Mayfly Emerger.  Mayflies undergo incomplete metamorphosis.  As the nymph rises to the surface to become adults, the wings may unfurl.  This pattern is typical of many wet fly patterns and teaches the addition of wings.

Place the hook in the vise and attach the tying thread. Wind the thread to a point opposite the barb of the hook.  Select 5-10 fibers from a hen hackle and attach at the bend of the hook. 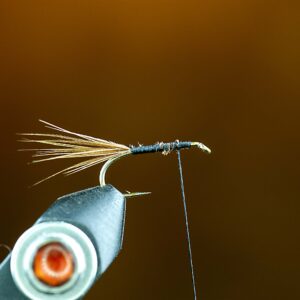 The hackle should be fairly soft. Trim off the butt ends and advance the thread to the eye of the hook.  Attach two peacock herls and wind the thread over the herl back to the barb of the hook.  Be gentle with the herl.  They are easy to break, and the tying thread can cut them. 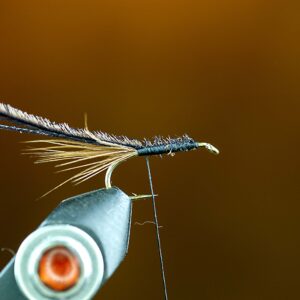 Hold the herl and tying thread together and wind both back to the head.   This puts a wrapping of thread over the herl as you advance them.  Tie off at the head and trim the butts. 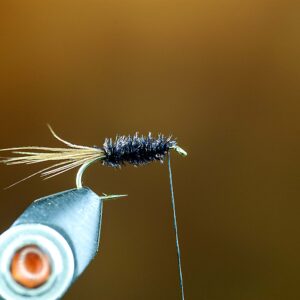 For the wing, you will use paired feathers from a turkey, duck, or goose.  Use the bodkin and separate the fibers from one feather.  The slip should be about 1/3 the width of the hook shank.  Cut the slip from the feather.  Repeat for the other feather of the pair.  Use fibers from the same position on the stem.  You now have two slips of a feather which should be nearly identical.  Place their concave sides together and attach the hook using a soft loop. The wing should extend to the bend of the hook. The most difficult part of the wing is keeping it on top of the hook shank.  Hold the wing and hook very tightly as you make your soft loop,  Do this twice. Add a couple more wraps to secure the wing and trim the but ends. 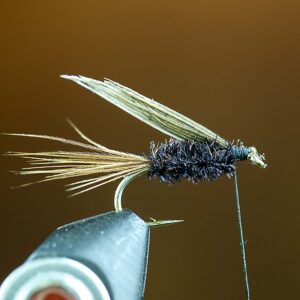 If you have trouble keeping the wing on top with the soft loop, try this.  As you make your soft loop, instead of pulling down on the thread on the opposite side of the hook, continue to wrap the thread to the near side and pull straight up.

Cover the butt ends with thread.  Wrap the thread to the eye, then back to the wing.  Add the soft hackle. The fibers should be 1 1/2 times the length of the gap. 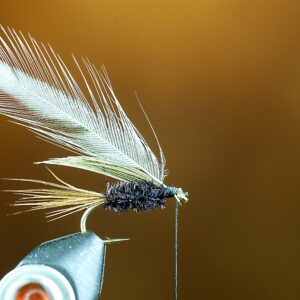 Tie in by the stem and make about 4 wraps. Tie off and make a neat thread head. Complete the head with a whip finish or half hitch. Apply head cement if desired.