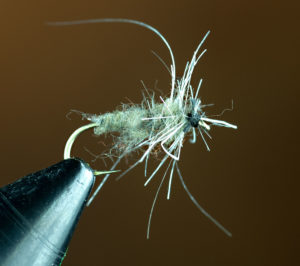 Blue Winged Olives, BWO, are mayflies that hatch all over the world and provide some of the most prolific hatches in flyfishing.  Baetis, BWO, will hatch year-round giving BWO dry flies a place in your box anytime you’re on the water.

Several years ago, some friends and I were fishing the Little Red River. We had fished all morning with some success.  At lunchtime, we went to Michael Ames Father and Mothers house to eat lunch.  They lived in Pangburn on the river.  While sitting on the deck, I noticed a fish rising.  It seemed to rise in the same place.  Suddenly it was joined by many other rising trout.  We went down to the river and saw that all the action was caused by a huge BWO hatch.  There were thousands of mayflies floating downstream, drying their wings before taking flight.  It was one of the largest hatches I have ever seen. We immediately started fishing but looking through our fly boxes could not find any suitable patterns to match the hatch.  We had no luck.  Michael did finally catch one fish.  I think it was more due to luck than skill.  However, Michael will probably disagree.

BWO can hatch throughout the day and can occur at any time of the year.  Our hatch occurred at about noon in October.  The flies range in size from 14 to 24.  Early in the year, the flies are larger becoming smaller toward the winter months. It is wise to always have a few matching patterns in your fly box for just such an occasion.

The BWO failed emerger is a modification of Ina Moutter’s pattern described his book Imitative Fly Tying. It is easy to tie, but it is not a very pretty fly.  Not every larva that tries to hatch into an adult is a success.  This fly is designed to imitate a failed emerger.  This fly can be used during a hatch but also after the hatch when trout cruise around picking up the cripples.  It is especially effective downstream in eddies and pools where cripples and shed shucks accumulate.

Place the hook in the vise and attach the tying thread.  Wrap the thread to a point opposite the barb of the hook.  Direct dub a small amount of dubbing and wrap a thin abdomen. 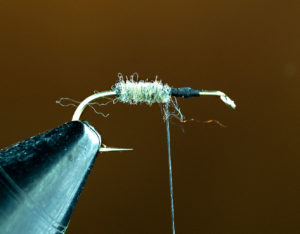 Mix the dubbing for the thorax in your hand. Add all the material used, then tease them apart. Recombine and repeat this process until they are thoroughly mixed.  Form a dubbing loop and wind the thorax. 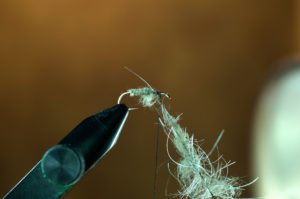 Trim the excess loop and whip finish the head.