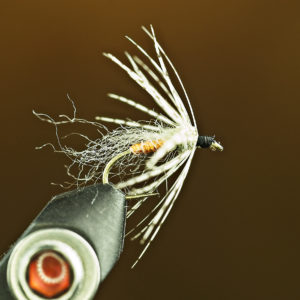 In 1981 Gary Lafontaine published a seminal work entitled Caddisflies. This book is based upon observations made while scuba diving.  In it, he describes the life cycle of the caddisflies and how they behave in the water.  LaFontaine goes on to develop various patterns and discusses how to fish them.

Patterns were developed for larva, pupa, as well as adults.  This post will only consider the pupa imitations. LaFontaine found that when the pupa emerges, it moves from the cacoon and drifts along the bottom for various periods depending on the species.  While drifting, it generates a bubble of gas inside the pupal skin, which helps it ascend to the surface.  Along with the bubble and movement of its legs, the pupa rises to the surface rapidly.  Again the pupa pauses and drifts just below the surface for variable periods.  It is at these times of drift that the pupa is most vulnerable to predation by the trout.

The fly I am describing today is the veiled caddis.  Similar to the sparkle pupa, it is easier to tie. It is a soft hackle fly with a modified thorax.  I used a size 12 Lightning Strike NW1 hook.  The abdomen can be anything you would use to tie a regular soft hackle. In the fly above, I used orange silk. Wrap the body to mid-shank.  Form a dubbing loop using dubbing and polyester yarn fibers.  The yarn fibers should be twice the length of the hook; although this looks like a lot of dubbing, much of it is removed when the thorax is brushed. 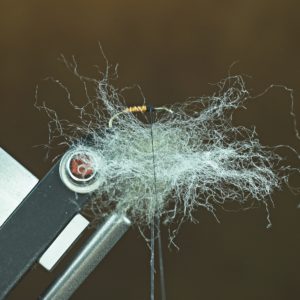 Spin the dubbing loop.  You can use a hand spinner.  I used a coffee frother with the whisk removed, and the shaft formed into a loop. If you spin too long, the thread may break.  No problem, just pick up the broken end and wind the thorax. 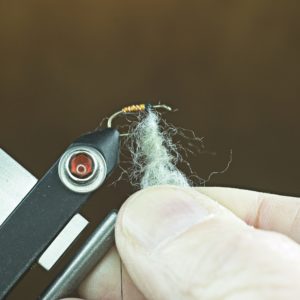 Make two or three wraps of the dubbing brush to form the thorax.  Brush the thorax, so the fibers form a veil over the abdomen. The abdomen should be visible beneath the veil. 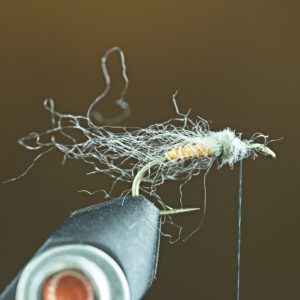 Add the soft hackle by tying in at the tip and make one or two turns.  Finish with a neat head and whip finish.

Fish this fly like any soft hackle. Add weight and fish it along the bottom dead drift.  Cast it across the current and drift in a wet fly swing.  Often the trout will take the fly at the end of the swing when the fly is rising in the water column.