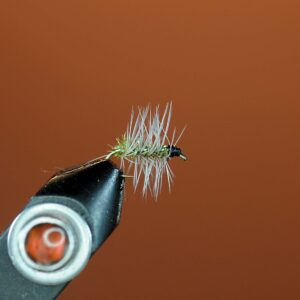 The Griffith Gnat, developed by George Griffith, is one of the easiest dry flies to tie.

I began tying flies in the 1970s.  I didn’t have access to many materials or help to learn how to tie.  There were no fly shops in Piggott, Arkansas, where I grew up, or Jonesboro, where I went to college. But somewhere, I came across the direction for tying a Griffith Gnat. My version tied on a huge hook, size 6, had a body of peacock and a soft hen hackle.  I thought it looked good.  I tried it on the Norfork river below the dam.  The first thing I noticed was that my fly did not sit on top of the surface. Instead, it floated just below the surface. The soft hackle fibers were gently waving in the water currents.  As I watched, a trout rose and examined my fly.  It followed the fly for a few inches and, to my amazement, took my fly.  I was so surprised that I forgot to set the hook.  Fortunately, the trout hooked himself. It certainly did not resemble any of the Griffith Gnats I tie today.  I guess the trout just thought it was food.

The Griffith Gnat represents a midge cluster.  Large midge populations exist in most trout waters, especially tailwaters.  Often there are large hatches,  even in winter when nothing else is hatching.  Large rafts of midges will float down the river providing a lot of food for the rising fish.

Hook size is generally size 12 to 22 with a peacock herl body and a palmared hackle of the desired color.

My version is tied on a Lightening Strike DF1 size 18 and has a body of Pearl Chenille Micro in Olive color. The hackle is a Blue Dun saddle feather.

I tie my material on at the rear of the hook and wrap forward.  The traditional method is described by Randall Kaufmann in Tying Dry Flies.