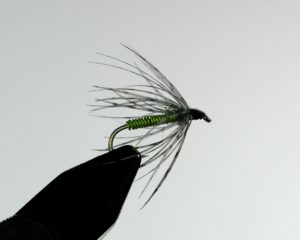 At the Sowbug two years ago, I was tying a Green Lantern Soft Hackle fly.  This fly is described in Allen McGee’s excellent book Fly Fishing Soft-Hackles. When I had finished the fly, a spectator said, “Do you want me to show you the correct way to tie a soft hackle?”

I said, “No”, he didn’t elaborate and left.  I think he was talking about the way the hackle was tied in.  Traditionally soft hackle flies are tied with the hackle first being tied in by the butt.  The abdomen and thorax is added.  The hackle wound around the shank, tied off behind the hackle and then the tying thread wrapped through the hackle.  A head is then formed.  This process is described in Dave Hughes’  book Wet Flies. There are disadvantages to this method.  When the tying thread is wrapped back through the hackle to finish the fly, hackle fibers can become trapped ruining the look of the fly.  If the hackle is broken, the entire fly has to be retied.  This method can not be used with some types of flies, such as bead thorax flies. The bead may not slide over the tied in hackle.

An alternative method, is to tie the hackle in by the tip. First select a hackle feather.  Strip the fluff from the back.  Use the thumb and first finger to pull as section of fibers backward and tie in by the tip.  Use hackle piers to hold the hackle up and pull the fibers rearward.  Wrap the hackle around the hook shank twice and tie off.  Finish the head.  This method has several advantages.