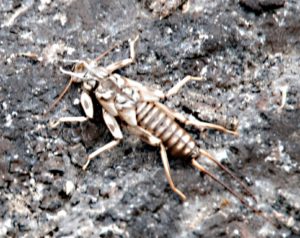 Do you have to know the scientific names of aquatic insects to be a successful fly fisherman or fly tier? The answer is definitely no!

My interest in Biology started in 1960.  My Jr. High science teacher, Ms. Inez Hartsoe, would bring various insects and aquatic invertebrates to class for display.  She would bring freshwater hydras and mole crickets, among other things.

Inspired by her example, I could often be found in a ditch or creek, collecting animals, mostly planarian, flatworms. I knew that if you cut the head longitudinally, they would grow two heads.   Most of them died, but on occasion, one would start to form two heads. I would promptly take it to Ms. Hartsoe, and she would display it.  I guess that is how I earned the label of a nerd. I’ m sure the slide rule and pocket protector didn’t help my image. Nevertheless, my interest in biology continued, and I eventually got my undergraduate degree in Zoology from Arkansas State University.

Today when I go fishing, I still turn over rocks and collect specimens.  So many fisherman rig up at the car and a tie on a fly before every getting to the river.  They tie on a fly that has worked for them before or that someone has told them about or perhaps that was suggested by the fly shop owner.  These fishermen do catch fish.  But as Swisher and Richards pointed out in their book Selective Trout, it might not work when a hatch is in progress. It seems reasonable that a fly imitating the local fauna would catch more fish than a generic fly.

But how do you identify the insects?  I recently acquired a copy of McCafferty’s book, Aquatic Entomology.  This book is designed for Ecologist and fly fishers.  It is a dichotomous key meaning that you answer a series of question yes or no leading you to the identity of the family of the insect.  Rarely do you need to identify the genus or species of an insect. If you do, other keys are available.  However, identification at species-level often requires the use of a microscope.  Often the only difference between one species and another is their genitalia.

McCafferty’s book is fairly expensive.  Hardbound on Amazon it cost around $300.  I bought the paperback used for $50.  I took it to FedEx office and had it spiral-bound so that it would lay flat.

How does this make me a better fisherman and fly tier?  If I know the name of the insect, I can then use McCafferty’s to learn t the local name.  For example, Paraleptophlebia mollis is also known and the American Iron Blue Quill, Dark Brown Quill, and Dark Blue Spinner.  I can google these names and find multiple patterns for this insect. By consulting other books like Mayflies by Knopf and Cormier or Caddisflies by Thomas Ames, I can learn about the behavior the insect and how and when to best fish it. 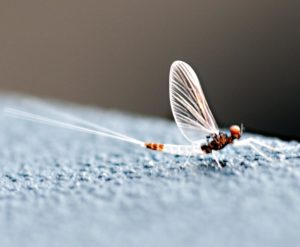 Steve Raymond in The Blue Upright says. “Eventually most tyers reach a point were they realize knowledge of entomology is a prerequisite to further advance, so they begin to study and learn about aquatic insects, then strive to fashion imitations of the insects they have studied or observed. In doing so, each tyer again. brings his own personal touch of creativity; to the vice.”

While in Bozeman, Montana, Boot and I had dinner at the Mexican Resturant next to the motel. This is the largest Burrito I have ever seen 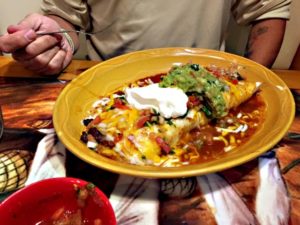 Look at the Size of that Plate!

He ate the whole thing! 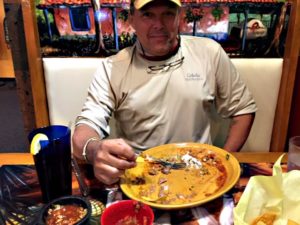