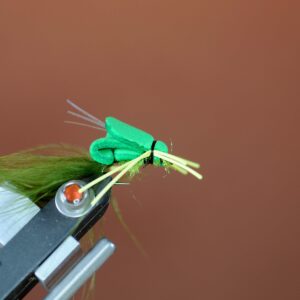 To tie this fly, place the hook in the vice. Next, attach the tying thread and wind to a point opposite the tip of the hook. This fly can be tied in various sizes. I used a size 8 Lightning Strike Numph hook, which works well for bream and bass. Although I used 8-0 thread for tying, you might want to use 6-0 or even 3-0 because of the pressure needed to tie in the foam. 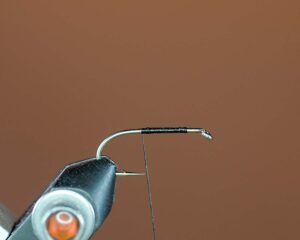 Next, add a tail. I like to use marabou with a little flash added. The original used bucktail, but the choice is yours. Tie in the tail, leaving the tying thread opposite the barb of the hook. 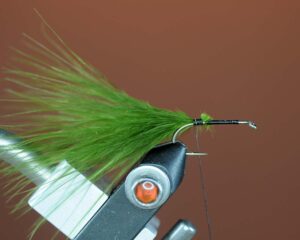 Tie in 2-4 pieces of mylar or crystal flash. Place the doubled mylar under the tying thread. Fold back over the tail and tie in. Trim the mylar so that it is just a little shorter than the tail fibers. 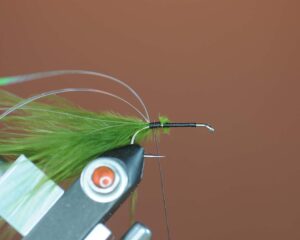 The body of the fly is 2 mm craft foam. I cut the preformed bodies using a laser. You can make the bodies without a laser. Patterns are available on the internet. Foam cutters are also available at the fly shops. They come in various sizes but are a bit expensive. In my experience, they also dull quickly.

Select a body and trim from the foam. 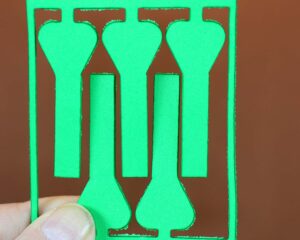 Attach the body at the bend of the hook and tie down. Where the body begins to widen should be at the eye of the hook. 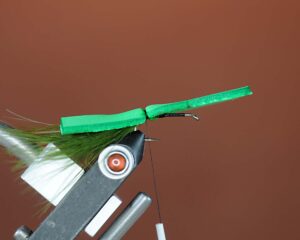 Fold the body away from the eye and dub a body of sparkle yarn or use chenille. Wrap the dubbing to the eye of the hook. 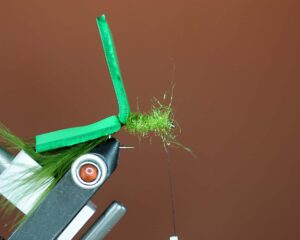 Pull the body down over the dubbing and attach the body at the eye of the hook. Make several turns of thread. 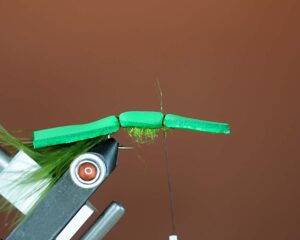 Body Tied in at Eye

Next, take one wrap of thread back to a point about 1/4 inch back from the eye and make several tight wraps around the body. 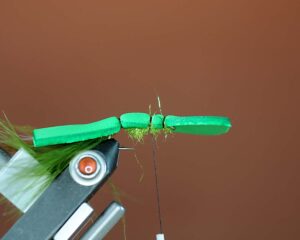 Thread Moved Back from Eye

Take the tail end of the body and fold over the back of the fly and tie down. You are forming a loop to hold air. When the fly is stripped, this will leave a trail of bubbles. Make the loop as large or as small as you desire. Trim away any excess foam, if any. 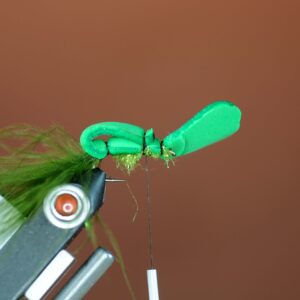 Add a  wing of mylar. Trim the wing longer than the body. 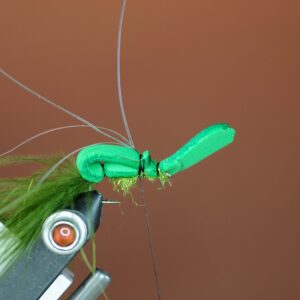 Pull the front of the foam body over the hook and tie down at the same place as the wing was tied in. 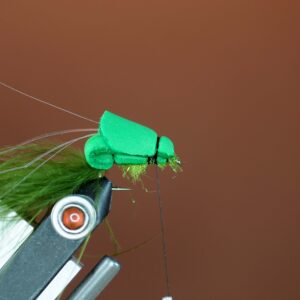 Finally, attach legs. Use two strands of rubber legs. Tie in the near side legs. Make a loose turn of thread over the legs and attach the far side legs. This leaves the legs attached at the front of the fly and keeps them out of the way while you whip finish the fly. 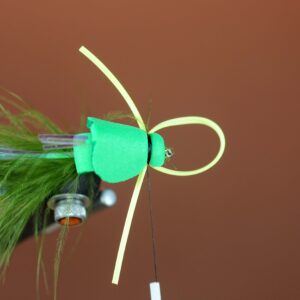 Separate the legs. Apply a little super glue to the thread wraps front and rear. 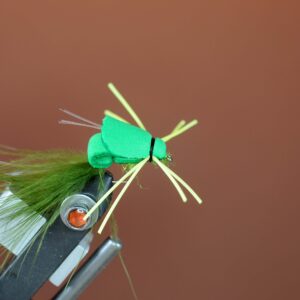