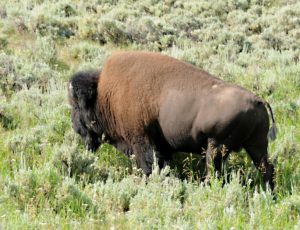 Just got back from a 4000-mile roundtrip to the FFI Flyfishing Fair in Bozeman, Montana.  For the first four days, Michael Ames, Boot Pierce and I fished the rivers around Bozeman and in Yellowstone Park.

The first river we fished was the Gallatin River.  From Bozeman, the Gallatin River follows Highway 191 to the  Park. 191 then continues to the town of West Yellowstone.  Access is easy, just pull over at any one of the numerous pullouts and fish.  Above Big Sky, Montana, the river is relatively narrow with moderate flows.  Wadding is not too hard, but there are bigger rocks, and they are slick.   I would suggest a wading staff. 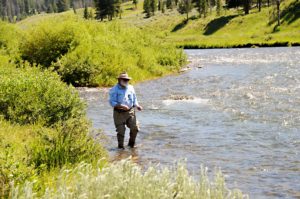 Bellow Big Sky the Gallatin runs in a canyon.  The flow increases, and the river gets bigger.  Wading requires a wading staff, but we caught several cutthroat trout. 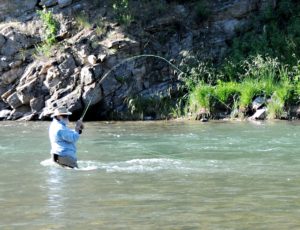 At Spanish Creek, the river runs out of the Gallatin Forest and through mostly private property. Public access points are available but are not as numerous.  Where Spanish Creek meets the Gallatin, the river gets much faster.  Boot caught several Grayling there.  When we called one of the fly shops in town, they told us there were no Grayling in the River.

We also drove to the Madison River.  It was crowded at Three Dollar Bridge and the River was rolling very fast.  Boot and Michael tried fishing without any luck, so we went back to the Gallatin. 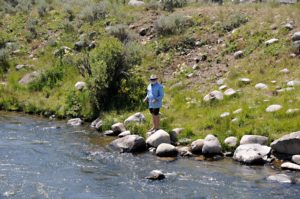 After two days fishing the Gallatin River, we drove into Yellowstone Park to fish for a day. We entered the Park from the North Entrance and drove to Mammoth Hot Springs.  Mammoth has some interesting sites, including a Museum, Hotel, and several stores.  One of the most interest things was the Elk grazing on the grass in front of the buildings, accompanied by signs warning the tourist not to approach the wild animals. 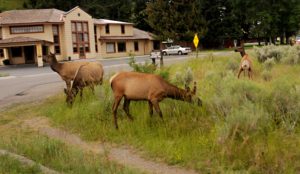 From Mammoth we drove to Tower and turned left to drive through the Lamar Valley to the Soda Butte river. There are several rivers to fish in this valley.  We had fished the Soda Butte in the past and had good luck. The Soda Butte river is a narrow river with moderate flows except where it flows through a small canyon across the road from the Trout Lake pullout. 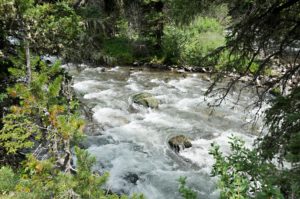 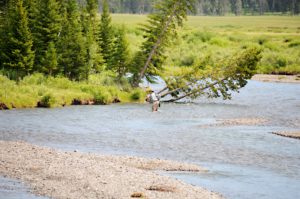 Along the road, we saw numerous buffalo.  Some were in herds but some by themselves just walking down the road blocking traffic.  There are signs all over park warning people to not get too close to the Buffalo, but every year someone is gored by one.  While we were there a family got too close.  The Buffalo charge. The  parents ran one way the 9 year old daughter ran the other.  The buffalo caught her with one of its horns and flipped her about 35 feet.  Fortunately, she was not hurt seroiously. We saw the episode on the news.

From the Soda Butte River, we drove back toward Mammoth and stopped briefly at Lava Creek.  Lava Creek is a small creek separated into an upper and lower creek by Undine Falls. 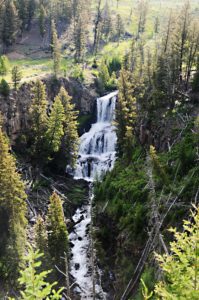 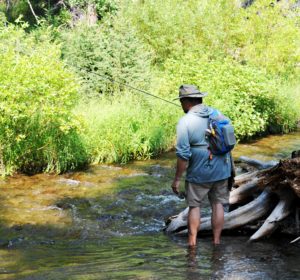 The lower section runs through a canyon with difficult access and holds all type of trout.  The upper creek contains mostly Brook Trout.  The fish readily take dry flies.   Here is one caught by Boot using a Hay Stack. 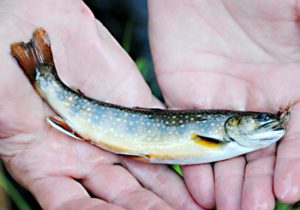 We had a good time fishing.  Boot who is a geologist, had never been to Yellowstone National Park before.  Here is how he looked during most of the trip through the park. 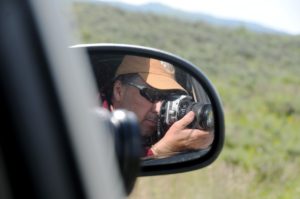 In the next post, I will talk about the FFI  Flyfishing  Fair.