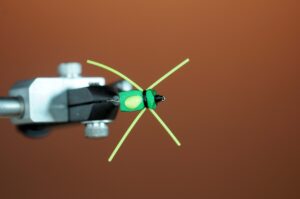 I recently traveled to New Jersey to attend the International Fly Tying Symposium. If you have never been, I would highly recommend it.  It was well attended, and there were some excellent fly tiers, including Fly Tyer magazine’s  Fly Tyer of the Year, Barry Ord Clake.  I especially enjoyed drinking coffee and talking to some of the tiers at 6 am in the hotel lobby.

One tier from Belgium was tying a foam beetle.   The fly,  easy to tie, required a precut foam body he was selling. So, after returning to Arkansas, I designed my fly bodies to be cut on a laser engraver.  Here are the directions for tying the Foam Beetle. 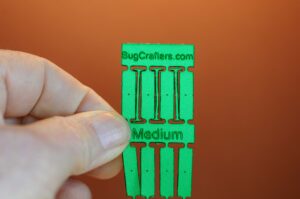 Here are the bodies as they come from the engraver; note that there is a hole in the center of each body.  Each body has a tab at each end for attaching to the hook.

Clip a body from the foam, leaving the tabs on each end.  I am using a size 10 Lightning Strike DF1 hook.  Place the hook through the precut hole. 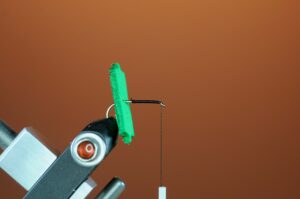 Attach the tying thread behind the eye and wrap it to the tip of the hook and back to the eye. 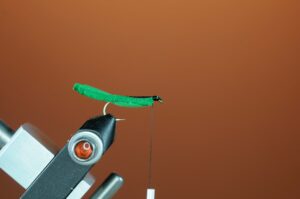 Bottom Half of Foam Attached

Bring up the bottom half of the foam and attach the trim tab to the hook shank.  Don’t crowd the eye. 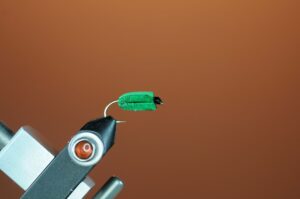 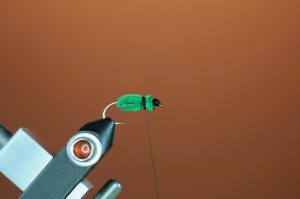 Reattach the tying thread about 1/3 of the body length back from the eye.  Make several tight turns and the one loose turn. 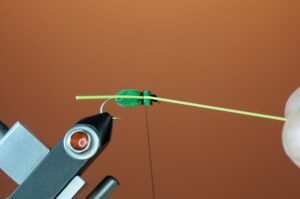 Leg Attached Near Side

Place a rubber leg under the tying thread on the far side of the body and pull under the thread to the near side. Position it in the groove between the body halves. 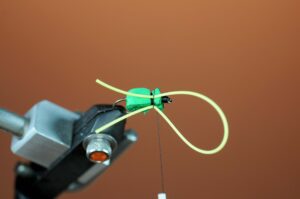 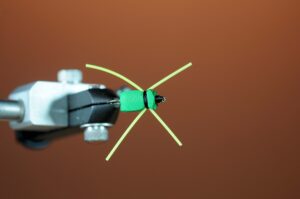 Clip the loop formed by the legs and trim to the desired length.  I like the back legs about 1 inch long and the front legs just slightly shorter.  The fly is now finished. 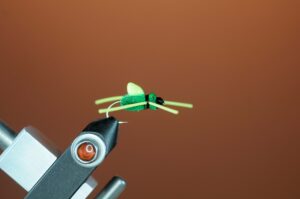 Sometimes dark body flies are difficult to see on the water.  Add a drop of fabric paint, available at the hobby store, to the back of the fly. Then, it will be easier to follow on the water.

This fly is easy to tie. It takes longer to read this post than to tie this fly. It is very effective for Bream, Bass, and Trout during the terrestrial season, late summer, and early fall.

If you would like a sample of these fly bodies, Send me a SASE. I will send you a card of 8 fly bodies.